7 Thoughts On Your New Apple Watch Overlords
by Paul Reda 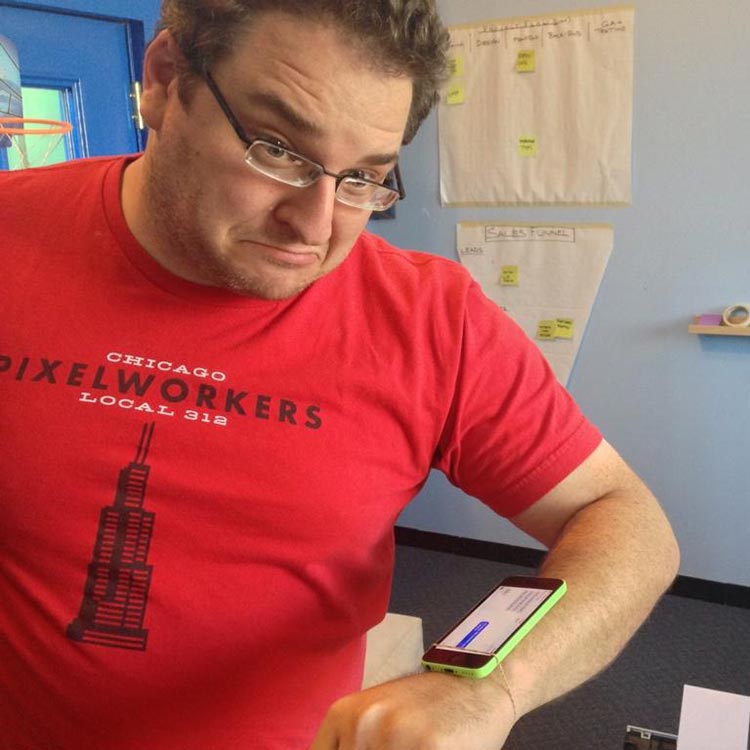 It's been an entire week since the announcement, so I'm sure you're totally clamoring to read yet another take on the AppleWatch. That's good because I've had an entire week to noodle on it, and as you might have guessed, I Have Opinions.

1. It's called AppleWatch and not iWatch because Apple is starting to worry about creeping genericization of their trademarks. Apple products so completely dominate the mindshare of the portable hardware industry that most (regular) people just call their things an iName. This had already happened with iPods (then again when was the last time anyone used an MP3 player not made by Apple?). I've heard several Moms I know say things like "I have a Samsung iPhone." Even NFL announcers refer to the (paid, product placed, and heavily branded) Microsoft Surfaces on the sidelines as "iPads." Harder for people to confuse the actual name of the product when the name of the company is in it.

2. Using the crown as an interface made everyone at the office go OOHHHH! at the exact same time. It's so damned obvious once you see it. Watches have used crowns as "interfaces" for years, but the first thing all the other smartwatch manufacturers did was strip it off. Apple kept it for a consistent watch UI, extended its abilities, and helped solve the problem of big fingers trying to scroll on a small screen. This is what happens when you put in the effort to care about hardware design and user experience.

3. I was surprised the price point for the entry-level AppleWatch is only $350. The Ethercycle office consensus was that they wouldn't go below $400, and I wouldn't have been shocked at $450. At $350 they won't be able to keep them in stock. It's only $50-$100 more than Apple's competitors, which is generally where Apple pricing ends up. Thanks to some new clients we've picked up recently I've gotten a crash course in the watch market over the past few months, and $350 is pretty cheap for a mid-level watch. Note that I didn't say "luxury" or "high-end", that is a completely different ballgame, I'm talkin' regular ol' watch that looks good and just tells time. The low/midrange mechanical watch market is going to get slaughtered.

4. It's verrrrry interrresting that no price has been announced for the gold "Edition" edition (god, what a stupid name). Apple is trying to feel out how high they can go, and the sky is the limit. Techcrunch claims it could sell for $1,200. Cringley says $3,500. John Gruber thinks $5,000. I think Cringely and Gruber are close to being right, and it could be more. $4,000 is nothing for a luxury watch. The cheapest Omega starts at $1,800. The cheapest gold Tag Heur is $4,200. The cheapest Rolex (that don't tick-tock) is $5,000. And these are the lowest models, it's easy for a luxury watch to go over $20,000. People like showing off how much money they spent on something - hell, that's the entire point of the luxury watch industry. The most expensive iPhone is always the highest selling model. And "champagne" (read: gold) is the highest selling color. I say again, $4,000 is nothing for this market.

That being said, Rolex and Hublot are competing in a completely different world than Apple. They can get away with charging those prices because their names convey a level of status and luxury that Apple doesn't. These watches are looked at as heirloom pieces that will hold their beauty and value for decades. Will an AppleWatch model be seen as a useful item for even 5 years? Do you want a cell phone from 2009 (say an iPhone 3GS) today? Hoping to pass your vintage iPod Mini down to your children? Apple is taking the idea of being a high fashion luxury brand very seriously, poaching executives from Burberry and Tag Heur. Still, the big guys will be safe.

5. I'm unconvinced at how much the watch can move Apple's bottom line - that's not a slam on the product, merely that Apple is a behemoth. Swatch Group made $9 billion in 2013. Apple made $170 billion in 2013 - so managing to equal the largest watchmaker in the world would increase revenue by 5%. Obviously Apple intends to grow the watch pie, the same way they did with smartphones, but how big can the pie really get?

(NOTE: the preceding two paragraphs are the ones you can throw back in my face in 7 years when Apple controls the watch industry and I look like an idiot.)

6. The smartwatch will become huge when the apps really get moving. When you can use your watch to make payments, track your health, control your house, etc. that's when it will seem like a no-brainer to buy. The killer app/service that makes everyone want a smartwatch probably hasn't been thought of yet. Think before 2007, would you have ever thought that people would buy a $400+ phone? Much less see it as being totally indispensable?

7. I can see myself being in the market for an AppleWatch 3 - after they've worked out the kinks, have the apps up and running, it includes a SIM card, and it looks like a Moto360.